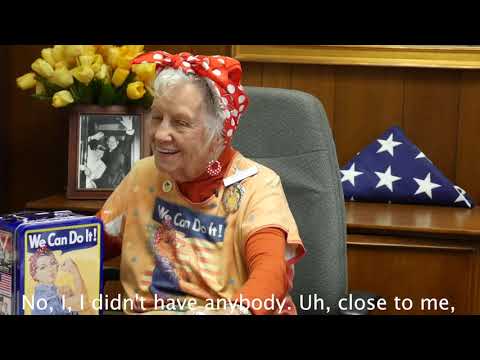 Virginia's boyfriend, George, enlisted at age 17 and was overseas for four years. Virginia moved to Wichita and worked at Boeing as a riveter and a bucker on B-17 wings for three years, then she worked at the Coleman plant until the war ended. George returned to the states and was hospitalized in California. Virginia traveled there to see him and they were married in California.

"I love the story about Ike and Mamie and how they met. And he was persistent, kind of like how my George was with me. He (Ike) was well-known and well-liked. I can't imagine what those men went through. . . They had to go through hell. Can you imagine you being the commander and sending a man out and some of them not coming back? I just honor people like Ike and what he went through. Yet he had a wonderful life."

This submission is honored by: Ike's Soldiers and the Eisenhower Foundation