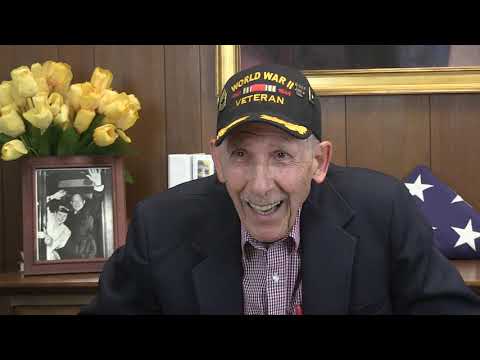 MSgt Louis Graziano is interviewed in the Eisenhower Foundation offices in Abilene, Kansas, before speaking during the 75th Anniversary of D-Day observance at the Eisenhower Presidential Library.

Special Duties: When his unit arrived in Reims, France, Graziano was charged with keeping all of the buildings occupied by Americans in working order. Among those structures was the Little Red Schoolhouse, and that’s how he got into the war room to watch the German commanders surrender. In 2019, 75 years later, Graziano was believed to be the last living eyewitness to the formal surrender of Germany at the schoolhouse in Reims. Of that monumental moment in history on May 7, 1945, Graziano has said, “I was honored. It was a great pleasure to be there. I felt sorry for all the men we had lost that helped us accomplish that.” In June 2019, he spoke at the Dwight D. Eisenhower Presidential Library during events commemorating the 75th anniversary of the June 6, 1944, D-Day Invasion of Normandy. Graziano was even honored at the White House in October of 2019, at the age of 96.

Entering the service in New York at the age of 20, Louis Graziano's World War II experiences include landing with the third wave on D-Day on Omaha Beach, fighting in the Battle of the Bulge, and serving on Dwight D. Eisenhower’s staff at Reims, France, when Germany surrendered. “I was a hair stylist before I went into the service,” Graziano said. “Then when I came out, I went back to hair styling. I’m still working. I’ve been there since 1956.” His children wanted to know about his war experiences, so he wrote "A Patriot's Memoirs of World War II: Through My Eyes, Heart, and Soul." His book shares stories of life, loss and love. He met his wife, a fellow soldier, while in the service. "As we focus on our country today, we must look back to our history to help us appreciate how we became the greatest power on earth and the men and women who fought to make this happen,” says Graziano.

Col. Boshoff sent Louis to install a telephone line in Ike’s quarters. Louis took his friend, Buck, stringing wire through towns and through fields, watching for mines. They spent two nights at Eisenhower's Headquarters. “We got everything hooked up for Eisenhower. He was real good to us. I think a lot of him. He was real good; kind to the men. He was always looking out for the soldiers. He said ‘The officers have enough rank to look after themselves, so I take care of the enlisted men.’”

This submission is honored by: Louis Graziano's family and the Eisenhower Foundation