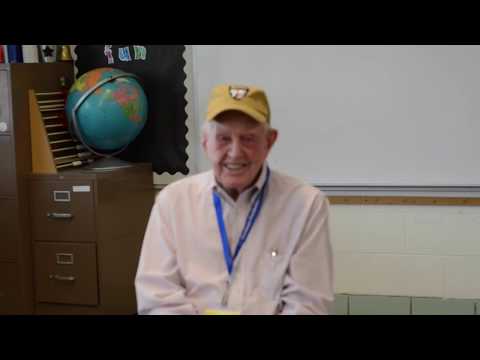 Carl Mills was born March 25th, 1927 in Winfield, KS. He grew up on a ranch northwest of Cedarville, KS and went to high school there until he enlisted in the Navy in April of 1945. He enlisted in the Navy before he graduated to have his pick of branch for service. His Father was a farmer. He met his mother working on a ranch in Colorado where his mother was working as a teacher. They married and moved to Kansas. Carl remembers his first day of service as staying in a hotel in Kansas City before traveling to the Great Lakes for training. His highest rank was Motor Machinist 3rd Class for the USS. Pledge AM277. He served in the Pacific Theatre and endured, what he later discovered, was a tsunami on the coast of Hawaii in April of 1946. After the service, Carl attended K-State, where it was crowded with Veterans. He then returned back to the ranch where he worked on his family's land until the mid 80's ranch economy crashed. He then transitioned into working for the county as a county appraiser for the tax department until his retirement at 74 years old in 2001. He then worked part-time for the state department revenue of Kansas part-time for 8 years.