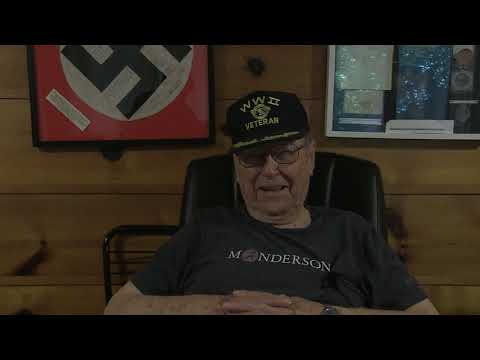 Special Duties: In the fall of 1945 Sharp was selected as a Sergeant of the Guard at the Palace of Justice in Nuremberg, Germany, where top Nazi leaders during World War II were put on trial for war crimes. He was responsible for security in the courtroom, prison cells and exercise areas. Sharp has written two books, “Sgt. of the Guard at Nuremberg” and “Diary of a Combat Infantryman.” Sharp founded and served as first president of the Kansas Chapter of the Battle of the Bulge.

Jim Sharp had an agricultural deferment before enlisting at the age of 19 and completing basic training at Fort McClellan in Alabama. Deployed to France, he fought in the Battle of the Bulge with the 1st Infantry Division, earning numerous battlefield decorations. Sharp fought in Belgium, Luxembourg and Germany. Following the war, Sharp attended Kansas State University on the GI Bill, raised a family and retired from Kansas Farm Bureau as manager of information systems and worked as an independent business systems consultant for several years.

"I think everybody over there (European Theater) felt just like I did that General Eisenhower was a soldier's soldier. When I was in college after the war, Eisenhower came up here (Manhattan, Kansas) and turned the first spade of earth on K-State Campus for the All Faith's Chapel, and I was there. So I saw him in person. I never shook his hand or anything like that. I've always respected him as a good general."

This submission is honored by: Eisenhower Foundation